The Buzz from Microsoft Ignite 2015

These tools give you greater flexibility for managing and protecting important business applications.

If your organization runs databases such as Microsoft SQL Server and Oracle DB, you probably know that these vendors primarily license their products on a "per-core" basis. Microsoft recently switched to "per-core" rather than "per-socket" licensing for SQL Server 2012 and 2014. This change can have a big impact on the total cost of operating a database, especially as core counts on new servers continue to climb. It turns out that the right storage infrastructure can drive down database costs, increase productivity, and put your infrastructure back in balance.

In many customer environments, NetApp has noticed that server CPU utilization is low—often on the order of just 20%. This is usually the result of I/O bottlenecks. Server cores have to sit and wait for I/O from hard disk drives (HDDs). We've been closely studying the impact of all-flash storage on SQL Server environments that use HDD-based storage systems. NetApp® All Flash FAS platform delivers world-class performance for SQL Server plus the storage efficiency, application integration, nondisruptive operations, and data protection of clustered Data ONTAP®, making it ideal for SQL Server environments.

Tests show that All Flash FAS can drive up IOPS and database server CPU utilization by as much as 4x. And with a 95% reduction in latency, you can achieve this level of performance with half as many servers. This reduces the number of servers you need and the number of cores you have to license, driving down costs by 50% or more and paying back your investment in flash in as little as six months. 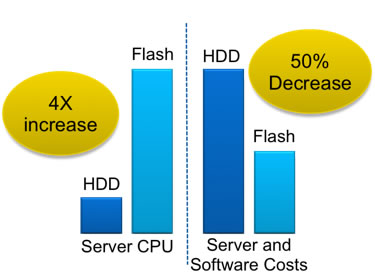 Whether you're running one of the newer versions of SQL Server or facing an upgrade of an earlier version, you can't afford not to take a second look at your storage environment.

End of Support for Microsoft SQL Server 2005 is Rapidly Approaching

Microsoft has set the end of extended support for SQL Server 2005 for April 2016—less than a year away. With support for Microsoft Windows 2003 ending in July 2015, time may already be running short.

If you're running Windows Server 2003, new server hardware is almost certainly needed when you upgrade SQL Server. Evaluate your server and storage options now to get costs under control.

To test the impact of flash on SQL Server performance, we replaced a legacy HDD-based storage system with an All Flash FAS AFF8080 EX. The legacy system was configured with almost 150 HDDs, a typical configuration for HDD storage supporting SQL Server. The AFF8080 EX used just 48 SSDs.

The test configuration consisted of 10 database servers connected through fibre channel to both the legacy storage system and the AFF8080 EX. Each of the 10 servers ran SQL Server 2014 Enterprise Edition.

The publicly available HammerDB workload generator was used to drive an OLTP-like workload simultaneously from each of the 10 database servers to storage. We first directed the workload to the legacy storage array to establish a baseline, increasing the load to the point where read latency consistently exceeded 20ms. 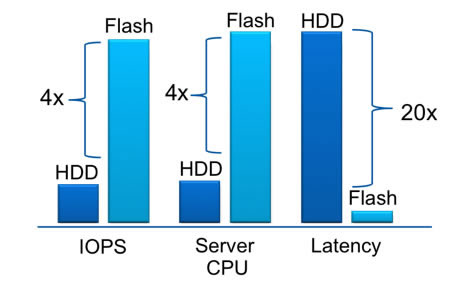 In other words, the database servers are able to process four times as many IOPS with dramatically lower latency. CPU utilization goes up accordingly because the servers are processing 4x the work per unit time.

The All Flash FAS system still had additional headroom under this load.

Let's look at what this performance improvement means for the total cost of running SQL Server 2014 over a 3-year period. To do the analysis we used NetApp Realize, a storage modeling and financial analysis tool designed to help quantify the value of NetApp solutions and products. NetApp sales teams and partners use this tool to assist with return on investment (ROI) calculations.

The calculation includes the cost of the AFF8080 EX, eliminates the costs associated with the existing storage system, and cuts the total number of database servers from 10 to five. This reduces SQL Server licensing costs by 50%. The same workload was run with five servers and achieved the same results. ROI analysis is summarized in Table 2.

Table 2) ROI from replacing an HDD-based storage system with All Flash FAS, thereby cutting server and licensing costs in half.

The takeaway here is that you can replace your existing storage with All Flash FAS and get a big performance bump while substantially reducing your costs, with the majority of the savings derived from the reduction in SQL Server licensing costs.

Replace your existing storage with All Flash FAS and get a big performance bump while substantially reducing your costs.

In addition to the ROI analysis, we also measured the maximum performance of the AFF8080 EX with SQL Server 2014. A load-generation tool was used to simulate an industry-standard TPC-E OLTP workload against an SQL Server 2014 test configuration.

A two-node AFF8080 EX achieved a maximum throughput of 322K IOPS at just over 1ms latency. For all points other than the maximum load point, latency was consistently under 1ms and remained under 0.8ms up to 180K IOPS.

In addition to performance testing, we looked at the overall storage efficiency savings of our SQL Server database implementation. The degree of compression that can be achieved is dependent on the actual data that is written and stored in the database. For this environment, inline compression was effective. Deduplication, as is often the case in database environments, provided little additional storage savings and was not enabled.

For the test data used in the maximum performance test, we measured a compression ratio of 1.5:1. We also tested inline compression on a production SQL Server 2014 data set to further validate these results and saw a 1.8:1 compression ratio.

First introduced more than 10 years ago, NetApp FlexClone® technology also plays an important role in SQL Server environments. Clones are fully writable, and, similar to Snapshot copies, only consume incremental storage capacity. With FlexClone, you can create as many copies of production data as you need for development and test, reporting, and so on. Cloning is a great way to support the development and test work needed when upgrading from an earlier version of SQL Server. You'll sometimes see these types of capabilities referred to as "copy data management."

The performance benefits that all-flash storage can deliver for database environments are significant: more IOPS, lower latency, and an end to near-constant performance tuning.

If you think the performance acceleration that comes with all-flash storage is cost prohibitive, think again. All Flash FAS doesn't just deliver a performance boost, it changes the economics of your operations, paying for itself with thousands in savings on licensing and server costs. In terms of dollars per IOPS, All Flash FAS is extremely economical relative to HDD.

And, because All Flash FAS runs NetApp clustered Data ONTAP, it delivers the most complete environment to support SQL Server and all your enterprise applications with capabilities that include comprehensive storage efficiency, integrated data protection, and deep integration for your applications.

For complete details on this testing look for NetApp TR-4303, which will be available in a few weeks. Stay tuned to Tech OnTap for more information as NetApp continues to run benchmarks with important server workloads including Oracle DB and server virtualization.

Reply
Was this article helpful? Yes No
2 Likes