NetApp® Insight 2015, Las Vegas was abuzz with excitement. It was palpable; you could sense it in the charged atmosphere. The term "Data Fabric" was on everyone's minds, and the general consensus was: "We're onto something big here."

When NetApp announced its Data Fabric vision at Insight last year, the response could be characterized as "polite interest." While well received, "Data Fabric" was a new term, a concept, and it carried a whiff of marketing. No one seemed overly excited. It sounded nice, but what did it really mean?

A New Level of Data Mobility

On Day 3 of Insight 2015, Las Vegas, NetApp founder Dave Hitz and NetApp Senior Technical Director Joe CaraDonna worked up a demo to show how NetApp is addressing customer issues with cloud lock-in over the data lifecycle. To be nimble and responsive, they noted that enterprises need the ability to move their data whenever and wherever they want—and do it with security, integrity, and a consistent, easy-to-use management interface.

"Joe's Awesome Backup" was the name of a 10GB NetApp AltaVault®-encrypted data volume sitting in an Amazon Web Services (AWS) cloud. The demo's purpose was to move that data out of AWS and into an Azure cloud running NetApp Cloud ONTAP™. Hitz pointed out that there's a lot at play here: two different data centers, two different hyperscaler companies, and two different storage operating systems with two different data formats.

Using NetApp OnCommand® Cloud Manager software, CaraDonna quickly set the network configuration and selected the target: Azure Premium Storage. On the big screen the crowd saw the workspace with two cloud icons side by side: AWS containing the AltaVault data on the left; and Azure running Cloud ONTAP on the right.

CaraDonna clicked the AWS cloud. He dragged it on top of the Azure cloud. Done. Without time-consuming mess or fuss, the data began migrating from AWS to Azure. Mission accomplished.

As Hitz and CaraDonna effectively demonstrated, NetApp's Data Fabric vision is more than a fluffy marketing concept. It's becoming recognized as a coherent, cohesive means by which organizations can accomplish their enterprise goals—now and going forward. And what we heard over and over from the customers and partners we spoke with at Insight was, "The data fabric is real. It makes sense to me. And it's something I can use."

What makes it real? For one thing, the maturation of integrated NetApp products and solutions like AltaVault and Cloud ONTAP. Behind the scenes, these tools enable a seamless user experience—and thus enable the cloud as a viable enterprise target.

But what drove the point home was the simplicity of these tools working together to execute complex operations, as demonstrated by Hitz and CaraDonna. Sure, there's a RESTful1 API behind every operation in Cloud Manager, but it's transparent to the drag-and-drop user—who experiences not different management environments across disparate clouds, but a connected, integrated whole. That's Data Fabric in a nutshell.

NetApp SnapMirror to Everything

Moving on, CaraDonna clicked "Joe's Awesome Volume", where the database resided in his "Awesome Backup," then selected the snapshot to restore. The summary screen in Cloud Manager showed the source and destination of the data volume. CaraDonna clicked "Go." We saw the workspace again with the two cloud icons—AWS and Azure—but now there was a status bar between them showing the data flowing from one cloud to the other.

Behind the drag-and-drop, CaraDonna and Hitz explained that an automated NetApp SnapMIrror® was running in AltaVault to effect the data transfer to Cloud ONTAP. The crowd cheered its approval.

That's just the beginning; NetApp intends to integrate SnapMirror replication technology across its entire product line. The official term for this revelation is "cross-platform SnapMirror," but everyone we talked to referred to it as "SnapMirror to Everything." It means data format is no longer an issue in replication—whether it's E-Series, FAS, or any other NetApp storage portfolio. The implications for data mobility are huge. This is how NetApp is building a Data Fabric.

Another demo that garnered lots of attention and generated lots of buzz at Insight featured NetApp All Flash FAS (AFF). Neto from Brazil, a consulting systems engineer at NetApp's proof of concept labs (CPOC) in Research Triangle Park, North Carolina, gave his technical demo on using a data fabric to move data into, out of, and near the cloud while maintaining impressive flash performance.

Sharing the stage with Jeff Baxter, NetApp director of systems engineering, and leveraging NetApp SnapCenter®, Neto moved an on-premises database—"Joe's Awesome Backup"—to NetApp Private Storage (NPS) near the cloud. He showed how application developers can use NPS for test/development. Then he used AltaVault to send that database to the cloud—all using SnapCenter, with the same interface for on premises and cloud.

But the big moment came when Neto took that same database and drove it from 10,000 IOPS to 40,000 IOPS to 200,000-plus IOPS with 2 nodes AFF. By adding AFF nodes to the cluster, we reached 1.18 Million IOPS with almost 10GBytes/s, 7000 snapshots, 100 clones with average latency of 0.9ms with NO DOWNTIME. The crowd once again showed its appreciation as Neto emphasized that no other company offers the products, solutions, and vision to enable these capabilities. 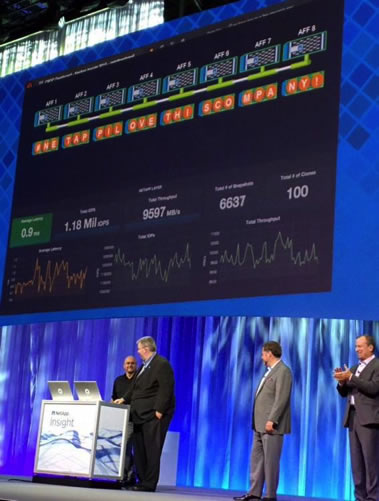 We spoke with dozens of customers and partners at Insight 2015, and we got feedback supporting the Data Fabric message from every direction. For example: As part of our Daily Recap podcasts at Insight , we interviewed Hercu Rabsatt, director of infrastructure at Mansfield Oil Company, an $8 billion U.S. petroleum supplier in Georgia that has grown by 50% over the last two years.

Rabsatt said that, not long ago, Mansfield's IT department spent 70% of its time focused on basic operations—fighting fires at ground level—and 30% on strategic activities. Now, leveraging NetApp solutions to build a data fabric that lets the company exploit private and hybrid cloud, the situation has reversed: Mansfield Oil IT spends 70% of its time focused on high-level strategic activities that add value to the business, and only 30% on basic operations.

Want to catch up with the latest NetApp news and experience some of that Insight buzz in a more immediate sense? You can view the Las Vegas general sessions or, again, check out our Daily Recaps of interviews with tech-industry luminaries, as well as an informed commentary from the Tech ONTAP Podcast team.

We had a blast and hope you will too. Thanks for listening.

"REST" is a commonly used acronym for "representational state transfer,"

Reply
Was this article helpful? Yes No
0 Likes