Until recently, very few companies needed to store over one petabyte (PB) of data. Today, it's commonplace. Similarly, the high cost and limited capacity of flash-based drives often meant that SSDs were only used for the most performance-sensitive applications. Today, the prospect of hosting the majority of your business applications on all-flash storage is no longer considered far-fetched.

NetApp® customers are leading this trend, with 70% of All Flash FAS (AFF) users already running mixed SAN and NAS workloads in VMware environments. Now, with the availability of 15 TB SSD drives and ONTAP® 9 software, more applications can benefit from the performance, reliability, and operational simplicity of flash than ever before.

Welcome to the One Petabyte (2U) Flash Expansion Shelf

The 15TB high-capacity SSDs will expand the use cases for all-flash storage systems to include:

The table below lists the usable and effective capacities for common configuration options.

*Based on root-data-data partitioning, RAID DP maximum group size of 23, and one spare partition per controller.

Of course, other SSD drive capacities are also supported, including 400, 800, 1600 and 3800 GB varieties, and you can mix-and-match SSD capacities within aggregates, drive stacks, and clusters. NetApp storage experts can help you determine the best combination of performance and capacity for your own environment.

In case you’re wondering why the total effective storage capacity in the table shows a 4:1 ratio — it reflects our new effective capacity guarantee based on the savings expected from the default settings on an AFF system, which includes inline compaction, compression and deduplication. Because your mileage may vary, ONTAP 9 makes it easy to track your savings using the NetApp AutoSupport dashboard, which provides a view of the overall savings by cluster-node and identifies the contribution provided by different types of efficiency technologies. 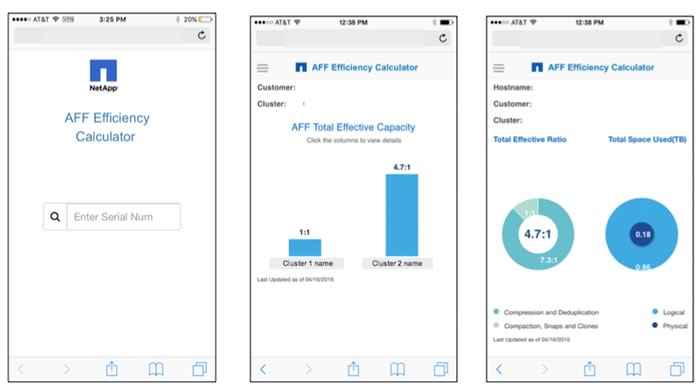 The ability to lead the industry with 15TB SSD support is a testament to the software innovations available in ONTAP 9. Unlike companies that are developing proprietary hardware designs, NetApp uses off-the-shelf SSD drives and has enhanced the ONTAP operating system to deliver scalable sub-millisecond performance along with enterprise-grade data management features. For example, AFF systems running ONTAP 9 can deliver up to 60% more IOPS at less than 1ms latency, compared with ONTAP 8.3. Database benchmarking for AFF systems running ONTAP 9 provided the following results:

The flexibility to mix-and match all-flash nodes with hybrid nodes in a scale-out cluster is yet another AFF advantage versus other all-flash solutions. Currently, 55% of AFF customers replicate their space-efficient flash snapshots to disk storage on a hybrid FAS system that is part of a common cluster.

Upon introduction, the new 15 TB SSDs are only supported on new AFF 8080 systems that run ONTAP 9 and which use our new 2U, DS224C 12gbps SAS disk shelves. Over time, support will be extended to additional platforms and configurations, including other AFF 8000 models, AFF MetroCluster, and FAS systems running ONTAP 9 software or later.

Within the past year alone, SSD capacity points have increased over 10x, from 400GB to 4TB. Today, NetApp systems are available with 15TB SSDs that are 50% larger than the biggest hard disk drives, with effective capacities that further amplify the advantages of flash storage over disk. With 32TB SSD drives expected to arrive in 2017, and with flash component suppliers continuing to drive the price curve for SSDs lower, it’s only a matter of time until the all-flash data center becomes a reality.

Learn more about ONTAP 9 from Jay Subramanian, NetApp vice-president of ONTAP Product Management, by registering for this webcast on Tuesday June 21.