Find out what other customers are saying by reading similar articles.

New to clustered Data ONTAP? These past articles will help bring you up to speed.

FlexPod Datacenter with Citrix XenDesktop and NVIDIA GRID combines the advanced capabilities of Citrix XenDesktop HDX 3D Pro with NVIDIA GRID GPU technology to deliver full graphics acceleration in a VDI solution for oil and gas, manufacturing and design, media and entertainment, healthcare, and other industries.

More than 3,500 healthcare organizations worldwide depend on storage solutions from NetApp, choosing clustered Data ONTAP to protect critical medical data from both planned and unplanned downtime, while delivering advanced data management that enables them to accomplish more in less time—and with less budget.

UZ Leuven is a large academic hospital based in the Belgian town of Leuven and a long-time user of NetApp storage clustering technology. One of the most respected healthcare providers and medical research facilities in Europe, UZ Leuven also acts as an IT service provider for nexuz health, sharing electronic medical records with other hospitals in the surrounding area.

Tech OnTap sat down with Reinoud Reynders, IT manager for infrastructure and operations at UZ Leuven, to discuss his team's experience with clustered Data ONTAP, the upgrade process from 7-Mode, and the overall benefits. 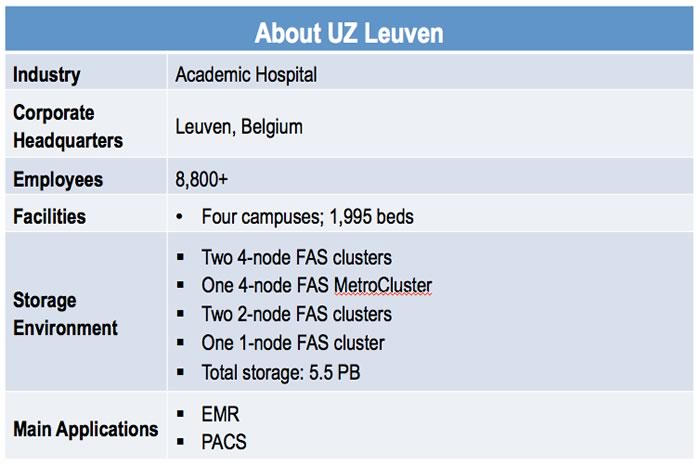 Reinoud: UZ Leuven adopted NetApp clustering technology years ago with Data ONTAP GX, before Data ONTAP 7G and GX were merged as Data ONTAP 8. The main reason we chose NetApp clustering back then was the ease with which we could move data from one controller to another without disruption to our applications. Today, this is still one of the most important reasons we use the technology. The second reason was availability—the ability to build a cluster that never dies. That's even more important today for everyone in IT, and especially important in a hospital environment.

TOT: Can you explain your current NetApp environment?

Reinoud: All of our storage today is on NetApp, with about 60 percent of our capacity on clustered Data ONTAP and the remainder on 7-Mode. By the end of 2015, that will reach 75 to 80 percent. All our systems have hybrid storage. We've been using Flash Cache intelligent caching for a long time and have been using Flash Pool technology for almost two years. Going forward, all new aggregates will include Flash Pool.

Our goal is always to have equal equipment in each of our two data centers so that the entire hospital can run from a single data center if needed. However, we're currently in the middle of a migration. We have a 4-node FAS6220 cluster and a separate 2-node FAS8040 cluster. We're migrating data from the FAS6220 cluster to the new cluster in preparation for splitting the FAS6220 cluster. Ultimately, we'll have two equal 4-node clusters in each data center, each with two FAS6220 nodes and two FAS8040 nodes. We will also be adding a separate 4-node MetroCluster.

The 4-node clusters in each data center support NAS protocols: both NFS and CIFS. Those will grow to include more nodes over time. As we begin migrating databases from 7-Mode, we'll add a separate cluster in each data center to support those as well.

TOT: How are you accomplishing the upgrade from 7-Mode to clustered
Data ONTAP?

Reinoud: In the early days with Data ONTAP GX, there weren't any tools in place. Fortunately for us, the type of data we migrated—PACS radiology images—was very easy to move. Since it was stored in NFS, it was really just a matter of copying all the old directories from 7-Mode systems to the cluster. Our digitizing project began on the cluster, so no migration was needed.

Today we are using the new tool for migration, 7-Mode Transfer Tool, and it works very well. We have done several migrations with it already. The tools are mature and work very well, and the prechecks are very valuable for identifying settings that need to change or the rare 7-Mode feature that don't exist in clustered Data ONTAP. As soon as we have our equipment in place we'll start moving the more complex data sets—the ones that are changing while you're doing the migration. Over the next few months we'll be doing more intensive data migration.

TOT: Which applications make use of clustered Data ONTAP?

Reinoud: We use our NetApp clusters to store medical information including all our digital radiology images plus digital images of all paper files. We keep all our Agfa PACS [picture archiving and communications system] radiology images online. That's more than half a petabyte of data. Since we keep a copy in each data center for redundancy, that's almost one petabyte of storage.

More than six years ago we undertook a major effort to digitize all our paper files—over 1.2 million of them. Today we are completely electronic and all those document images are stored on the cluster where it can be retrieved by our medical application. Any paper records that enter the hospital, such as referral letters and so on, are now digitized immediately and accessible online as part of a patient's complete medical record.

We also have a high-performance computing environment for human genome work. The files in this environment are very big, greater than a terabyte in size, and processing is very I/O intensive, so we store that on the cluster as well.

We already have some VMware on the cluster, and we'll be transitioning other applications and databases over time. We'll also be adding All Flash FAS nodes to support our VDI environment.

When it is deployed, the MetroCluster environment will be used to support VMware server virtualization as well as PACS and other file sharing applications where it's important that the second copy be synchronous.

We use NetApp's storage quality of service feature to prevent the different workloads from affecting each other. 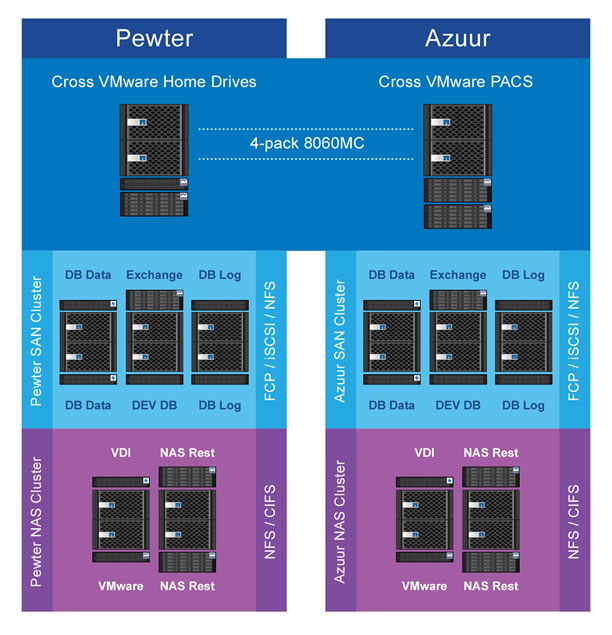 TOT: What advice would you give IT Teams looking at clustered Data ONTAP?

Reinoud: The time is now to upgrade to clustered Data ONTAP. All the tools are there for migration, and all the features are there to support your applications. It's best to proceed step by step to gain confidence, but you will see that things will go faster than you originally thought.

To learn more about UZ Leuven, read the NetApp success story, UZ Leuven Provides 99.999% Availability While Reducing TCO for IT with NetApp.

Was this article helpful? Yes No
0 Likes