The Challenges of a Traditional Continuous integration (CI)

The following diagram shows the process on a traditional system. It has many pitfalls along the way that complicate and significantly slow down the process.

To test a traditional system, we ran an experimental build. For our build size of 500GB, we had a build time of 10 or 11 hours. This build time involved synchronization of the source from the repository, source compilation, code coverage, build optimization, build size calculation, locking the build after completion, and updating build results in the database.

In our experimental build on a legacy system, we encountered the following hurdles:

How FlexClone Technology Is Integrated into a Continuous integration

To compare with the traditional system, we then performed another build by using NetApp FlexClone cloning and Jenkins Pipeline. To start, we used NetApp FlexVol® volumes to replace directories that had acted as build workspaces in the legacy system.

FlexVol volumes give you the flexibility to clone workspaces instantly (called FlexClone volumes) without relying on manual copying. This feature is of great use to promote a build and to replicate a build workspace in your developer environment instantly. The following figure shows the relationship between the various NetApp components in a build system. 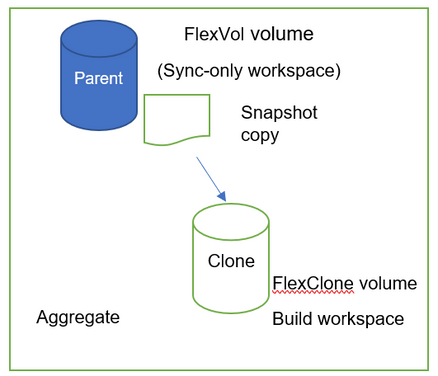 Snapshot copy: A NetApp Snapshot™ copy is a read-only image of a traditional or FlexVol volume, or an aggregate, that captures the state of the file system at a point in time.

Aggregate: An aggregate is designed to provide storage space to one or more FlexVol volumes. It also offers security, backup, performance, and data sharing.

Jenkins Pipeline (or simply Pipeline, with a capital “P”) is a suite of plug-ins that supports implementation and integration of continuous delivery pipelines into Jenkins. For our comparison, we articulated and rearranged the steps in the Continuous integration stages in parallel to get the benefit of the Jenkins parallelism feature. The following diagram shows our CI process with FlexClone cloning and Jenkins Pipeline and parallelism.

The combination of NetApp FlexClone volumes and Jenkins parallelism in Pipeline reduced our completed end to end scratch CI pipeline from 10 or 11 hours to 5 or 6 hours. That’s an impressive 50% reduction!

The Advantages of FlexClone Volumes and Jenkins Pipeline

In comparing the two builds, we found that FlexClone technology combined with Pipeline provided many benefits over the legacy system, including:

In our build, we deployed AFF A700s nodes to take advantage of the effective deduplication and compression. You can find two models of the NetApp AFF A700s system:

With the SnapMirror feature of NetApp ONTAP® software, you can replicate data from specified source volumes to specified destination (mirrored) volumes. The following figure shows the SnapMirror replication process. There are significant improvements to this feature in latest releases of ONTAP, make the data replication faster, consistent and reliable.

Incremental SnapMirror mirroring is an easy way for you to replicate a build artifact at a second destination in real time with your primary build. You don’t have to re-create your build at the destination site for running the tests.

To showcase the benefits that you get with SnapMirror, I present the following use case:

In asynchronous mode, Snapshot copies of the volume are created periodically on the source. Only blocks that have changed or that have been newly created since the last replication cycle are transferred to the target, making this method very efficient in terms of storage system overhead and network bandwidth.

If there is a dedicated bandwidth for SnapMirror mirroring, the priority can be set to high.

The schedule determines how often Snapshot copies must be created for SnapMirror mirroring.

The following diagram shows the SnapMirror mirroring process from RTP to SVL. 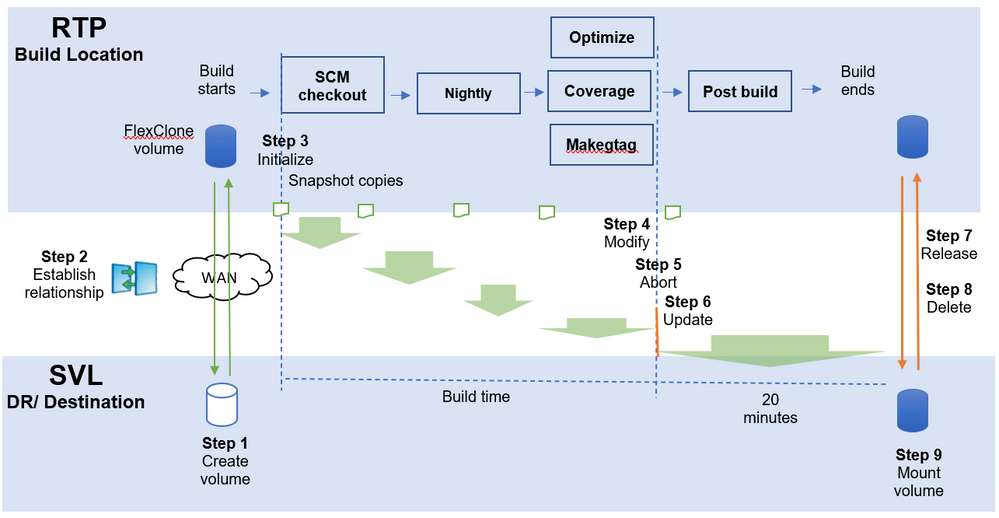 The following steps and their respective commands correspond to the steps that are shown in the preceding figure.

Note that all the commands must be executed at destination site SVL except Step 7.

Step 1. Create a mirrored volume at the destination site

Step 2. Establish a SnapMirror relationship at the destination site

Step 4. Modify the schedule to NULL

Step 7. Release the SnapMirror relationship at the source location

Step 8. Delete the relationship at the destination site

Step 9. Mount the volume at the destination site

One of the goals of DevOps is to establish an environment that enables developers like you to release reliable applications faster and more frequently. NetApp FlexClone technology promotes such productivity by making your build system easier to use and by speeding up the build process itself.

And with NetApp SnapMirror technology, you get an important DR and general-purpose replication tool. You can use SnapMirror to establish a centralized build farm and to replicate builds in another location across WAN, without the bottleneck of long transfer times.

We Need to Talk
All Community Forums
Public