What's new in SnapCenter 4.6 for Database and VMware vSphere management 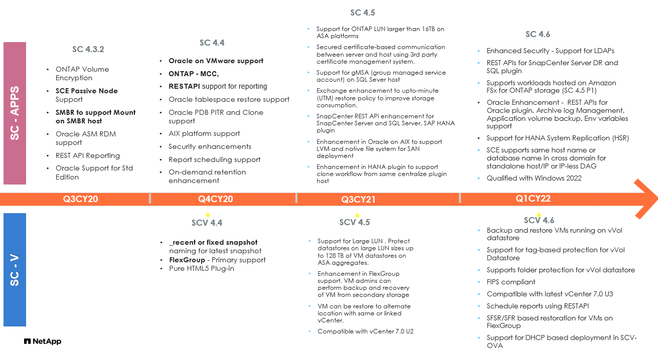 SnapCenter 4.6 offers a plethora of new features for both databases and VMware plug-in. The following snippet displays a list of cool features supported in SnapCenter 4.6 and SnapCenter Plug-in for VMware vSphere 4.6. To brief on a few of the big-ticket items: 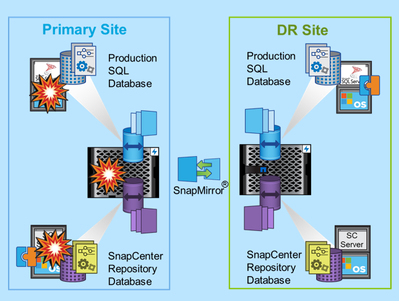 To know more about this feature, check out the demo

What’s new in SnapCenter 4.6 for Oracle

This release focuses on improving automation opportunities for the Oracle plugin, managing applications along with the database backup, support for our new cloud offering, and simplifying the overall log management process during recovery. Let’s have a quick glimpse of each of them.

We have introduced two new features in the automation category that includes the following:

This feature provides customers/ partners /service providers the ability to develop scripts with environment variables so that these variables can substitute values such as DB name, backup and host details and so on during the backup/restore/clone workflow. This helps in reducing the number of scripts for managing each database, especially in situations where you have some pre or post steps that must be executed during the database backup, restore and clone workflows. Currently, SnapCenter plugin for Oracle supports 30+ environmental variables. Look for the documentation for precise list of variables.

The application volume backup is a new capability /extension built within the Oracle plugin that helps customers to take a backup and clone/copy of the given application. This extension enables users to choose a given set of volumes associated with the application for backup and clone operations with the flexibility to pass both pre- and post-scripts during the workflows. Customers can also club both application and database together in a single resource group for a backup job.

For example: Imagine you have an Oracle ERP application (such as e-Business suite ) that needs to be backed up along with its Oracle database. You can now use this new extension to club both the application and database in a single backup job instead of two different jobs. It further enables you to clone this application volume and mount the cloned file system to the given host, thus providing you with the option to restore specific files / directories or use it completely for DEV/test purposes.

With the recent introduction of Amazon FSx for NetApp ONTAP, customers can easily manage the same set of on-premises applications in the cloud infrastructure with no change in the underlying application or data format. Amazon FSx for ONTAP provides scale, performance, and flexibility like on-premises with support for NFS, ISCSI and SMB. Starting from 4.5p1 and 4.6, SnapCenter can be deployed either in cloud or on-premises to manage Oracle databases hosted on FSx for ONTAP. Customers can also protect application consistent Snapshot copies from one FSx in a region to another FSx through SnapMirror, thus allowing clones and restores from the secondary copy.

With 4.6, SnapCenter has the built-in intelligence to detect the optimized number of log backups that need to be mounted for recovery and automates the overall mounting and unmounting process. This capability is leveraged automatically based on the selection of recovery scope (such as SCN, date and time and until cancel) during the cloning and restore operation.

If you are interested in deploying NetApp SnapCenter to protect and manage your mission-critical database /VM environment, then give us a shout! We’d love to talk with you about what we can do for you.

For more solutions, see the NetApp documentation or to set up a conversation with us by submitting a request here.