The Grafana is installed with this versions:

After this expansion one of the new nodes have very high (~20000%) CPU utilization for about 3-4 minutes. This peaks appear irregular. There are no other peaks from volumes or network during the same time, what could be the reason for this CPU peaks.

We opened a case and Netapp checked the Metrocluster, but everything is fine. They don't see in the perfomance data they have any CPU peaks or problems.

So we and Netapp think, the Grafana is not working fine or uses wrong performance data.

Here is a chart:

Does anyone here have similar problems or an idea what the reason could be.

We would be happy for any suggestions.

Andrea2
In response to TMACMD
2,450 Views

We already use Active IQ Unified Manager. There are no peaks. Do you know a BUG that could point to our problem?

Does anyone have an idea how we can find out what is wrong with our monitoring system?

If Active IQ Unified Manager report normal values and Harvest/Grafana doesn't, it would indicate an issue in the way Harvest/Grafana interpret the numbers and not an issue on the storage system

Andrea2
In response to kahuna
2,420 Views

I checked the whisper file nwk_exempt.wsp from the effected node

and you can see, this value is exactly the same that grafana is presenting.

I wonder, where this high value is comming from.

Could the harvest default config be a reason? Do you know, where I can get one for cDot Ontap 9.7.P13?

In the last years we just copied the old one with the name of the new Ontap version, when we did an Ontap Update.

There is something wrong with your monitoring tool

The version of Harvest you are using is deprecated. We have a completely new version which is open-source and available here: https://github.com/NetApp/harvest

Would you consider to upgrade to the new version?

Regarding the issue you have, I fear this is a ZAPI issue specific to your ONTAP version. Could you run the following commands and share with us the results?

DFS
In response to vachagan_gratian
2,168 Views

I am Andrea's colleague.
Yes. We are definitely considering the new version.

But it would be good if we had an explanation for this phenomenon in version 1.6.

The issue of the per-counter-utility is attached.

Apologies for the late response and thanks for the data.

I could not figure out what's wrong with the data, but we can try two things: 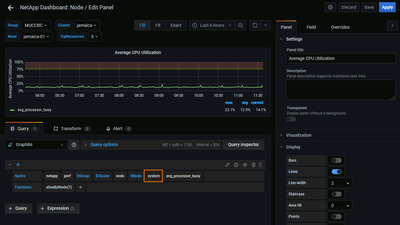 (2). For better debugging, can you send me the same data that you sent earlier, but twice? You'll need to run  exactly same command, with a ~10 seconds interval in between.

Andrea2
In response to vachagan_gratian
2,011 Views

thank you very much for your response.

1) We changed the graph to "system" and now we don't see any peaks.

It seem's that the calculation from Harvest is not working fine. Do you have a more detailed explanation for this?

2) We run the command at an interval of 10 seconds (perfcounters1.txt and percounters2.txt)