We moved forward with upgrading to 9.8P2 for the "new" Snapmirror Cloud feature allowing S3 target(s) for Snapmirror.  This along with purchase of StorageGrid is a solution we have chosen as an Altavault replacement strategy for Data Protection.  That's all fine, but when looking at the GUI that came along, this is absolute bollux!  Yeah I poked a bit at the pre-release at 9.6 but didn't really dig at all.

After digging through the GUI I finally found the Local Tier for aggregate creation, however even after finding this, it doesn't allow for ANY manual aggregate/disk selection!  No modeling of RaidGroup size, I might not want to select EVERY SINGLE Spare disk that is currently available.  I made the mistake of thinking if I highlight or select (which it only grayed but not selected), and hitting save.  IT GLADLY WENT AHEAD AND CREATED FIVE AGGREGATES UTILIZING ALL RECOMMENDED SPARES!  No prompt reviewing operation before blasting ahead, no checkbox for creating manually as before .  You might say, well that was stupid of me to do.  I'd say this dramatic change in GUI without so much as a warning, SUCKS!  I was able to quickly identify them as aggregates with zero volumes, I don't have every aggregate committed to memory, and deleted them through the 3-dot ellipses.  AND no it didn't prompt "are you sure", or selecting an offline operation.  I sure hope there's verification if some one selects an aggregate containing a volume.

I "google" searched, finding a Reddit thread complaining quite vociferously about the 9.8 GUI, and within found this NA Community link.  It seems the opinion is pretty unanimous.  If I had the option, I would entertain the idea of reverting to 9.7 but I don't.  We'll also be adding an HA pair into the cluster soon, I will be exploring running a mixed version and if moving my cluster-mgt LIF to 9.7 is at all possible.

According to your own Community posting: https://community.netapp.com/t5/Tech-ONTAP-Blogs/10-Common-Questions-about-Provisioning-in-ONTAP-System-Manager-9-8/ba-p/162603

"If you need a local tier configured in some way that’s not aligned with ONTAP best practices, it can be done by using the ONTAP CLI or REST APIs. "  So we're forced to CLI or program our own interface with Python/REST API for simplicity!!??

BRING BACK ADDED FUNCTIONALITY!!! If everything is done by REST, as seen toggling the API Log, then program all the functionality back in and release a Patch Release.  Don't make us wait for 9.9 or will it be 9.10?  WTF is with 9.9 for CVO only?  Another topic for another day...

* I have another issue with GUI - SVM creation*

I need to serve both NFS and CIFS in a new SVM.  I had to drop trying CIFS on GUI creation because the GUI apparently only allows or is programmed to use only the default Computers CN.  There's no where that I could feret out how to enter the CN=SVMname,OU=x,OU=x,DC=x,DC=x specific path.  The previous GUI's allowed specifying the AD object path.  We have locked out the default Computers CN based on MicroSoft's best Security practices.

Entire SVM (selected both protocols) fails with a SecD Error: An account by the name already exists - that was the idea to put the object in its proper path.

2) No pre-populated AD object  - Nope ( no path in GUI allowed for entry, default only )

Entire SVM fails with large pink box with a bunch of successful communication messages, but in the end a failure to write to CN=Computers with a Constraint violation as we've locked the default CN=Computers.  Again, following MicroSoft's Security best practices.

Result:  Yup, you guessed it, on to CLI.  I used the GUI to go ahead and create the SVM with NFS and interface.  I haven't created the CIFS/SMB with CLI yet, that'll be today's attempt.  I'll update if that isn't successful, that'll be a real problem for me.

** NOTE ** I didn't get the chance to select which Aggregate the vserver root volume went into, a choice we previously had with GUI as well.  STOP SIMPLIFYING (a.k.a. dumbing down) the GUI, I don't want to have to turn to CLI for what used to be simple ADMIN functions!!!

Adding cifs from the cli is pretty easy. --

This has not simplified the user experience. Where are all the features gone, I cannot even find peering or how to run a takeover. Why foist a user interface on the public that is not user intuitive.

True enough, however having been forced into a two step operation - create vserver with NFS, then CLI serving CIFS on same vserver - , forced an additional step of deleting the LIF created for serving NFS protocol, and creating the same with both protocols.  You can't add/modify a LIF to add a protocol, at least not with advanced privileges, didn't try diag.

Like you said, not hard but it just doesn't fit the idea of simplicity of storage administration via the GUI.

No doubt - the new UI is a total pooh-show.

The new UI is utter garbage. We were forced into it as our new AFF-A400 requires 9.8P1 at a minimum. If the UI were a junk car, the guys from Roadkill would pass on it.

I don't want to rehash all of the other negative comments, but what used to be simple in terms of managing the storage has now become complicated and time consuming and NOT INTUITIVE.

Yes it may be simplifying the interface, but it has only done that by removing most of the functionality for performing day to day administration tasks.

- It is no longer possible to only display volumes that are more than a certain % used. You appear to only be able to  filter on available space.

- Aggregates have gone. Now hidden in Tiers, where I can't get a simple table view, they are all spread out over a dashboard, that makes simple gathering of information near impossible. How can I see which aggregates have the most free space, or indeed are getting a bit full? The used and available figures are based on fantasy. I have approx 3.5PB of raw space on my cluster, but the new interface reports that I am "using" 85.5PB. Great for Marketing, but useless to a storage admin

- Slow is not the word. How much additional CPU drain is caused by the overblown "Early Learning" interface?

I have only been using the new "improved" interface for a very short while, so I suspect I will find even more annoyances as I go. Looks like it is time to move completely over to the CLI.

If this is simplifying the user experience it is akin to Ford simplifying the interface on their cars by removing the steering wheel and pedals, and filling the boot with bags of cement.

The items you mention are all fixed in ONTAP 9.9.1 which was released on 5/6/2021.  There are many more that are detailed in the customer product communiqué for (RC1) of NetApp® ONTAP® System Manager 9.9.1 management software.  The one I haven't shown in the graphics below is the performance improvements.  Engineering has been making progress in the underlying API and UI responsiveness.  9.9.1 has got better and more performance improvements are coming in future releases. 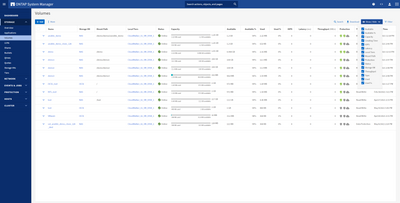 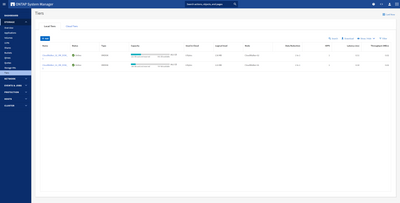 Used and reserved is now a prominent value.

PM me if you would like to discuss further or have any other questions.

Glad to see NetApp is listening. I'll be interested in hearing from those who use 9.9.1 to see if it cleans up all of the missing items or just some of them.

Engineering is making progress...  While I would love to post our plans publicly, that's not something we can do.  My recommendation is for anyone who wants to know what these plans are, to reach out to your NetApp account team and or partner and schedule an NDA briefing on System Manager.

Another way engineering is working to get some of these features out faster is to backport changes into P releases.  A couple of the items that Glenn mentioned in his posts planned to be in P releases of 9.8.

Nice to hear! Thanks Chris. As you can see the 9.8 interface is a huge pain point for long time users. I am intentionally delaying deploying 9.8 just based on the comments I've read in this thread. Hearing about the recent update is encouraging, and as I said I'll watch to see how real-world users feel about the update and future updates. But this appears to be a good step toward getting back to 'normal'.

While I'm 'here' I'd like to address one pain point that was introduced in 9.3's System Manager. From that point on, the GUI REQUIRES that you add an extension to snapmirror target volumes. Our standard is matching volume names, so ever since 9.3 I have to manually log onto the target system and rename the target to remove the extension. Making the extension optional would remove this irritating manual step. I also have to manually enable thin provisioning and data compaction for each new volume we replicate. Adding the ability to choose these in an 'advanced' button or something would be helpful.

Glad to hear improvements are being made and NetApp has actually listed to all the noise about the new interface.

However since these have only been released into the RC1 build in the last day or so, it will be months before any iteration of 9.9 becomes the recommended release for larger customers, and we are able to update our systems.

Thankfully we are still on a 9.7 "p" release, so have retained access to the "Classic" interface for the time being.  I just hope we can avoid having to move to 9.8 entirely. 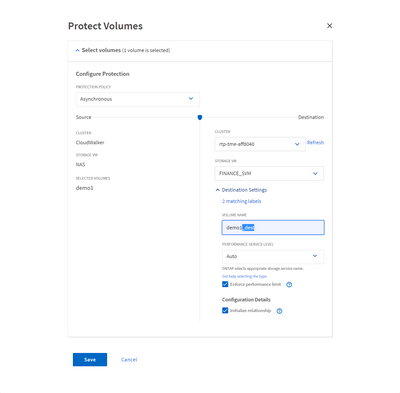 Hey @chrisgeb that is great! As I said it's been a pain point for several years. Glad to see it has finally been changed! We'll get to 9.9.1 eventually.