I've just read the new 3548 TR about Metrocluster and its architecture and I'm quite sure to have well understood that concept. I know fabric metrocluster for in the past I've set up several of them and, every time I was sure that there was a "dark fibre" on the ISL, a dedicated media or something that "come out" from some carrier multimodal line spilled out by a DWDM.

Reading at the recommedations on that TR I have theoretically a confirmation. See image below.

But, several times, it happens that customer declare to have some "FC/IP" line between distant sites, Cisco MDS 9513 and/or MDS 9222i used for other ISL using this "FC/IP" (I know this last one switch is in the MC matrix but I also know that the 4 switches must be dedicated to the MC!).

So, this does not match with NetApp Fabric MC requirements.

Is there some detailed document that can explain this? We're not wan communication experts so we can loose ourselves in this kind of analysis.

Thank you very much in advance 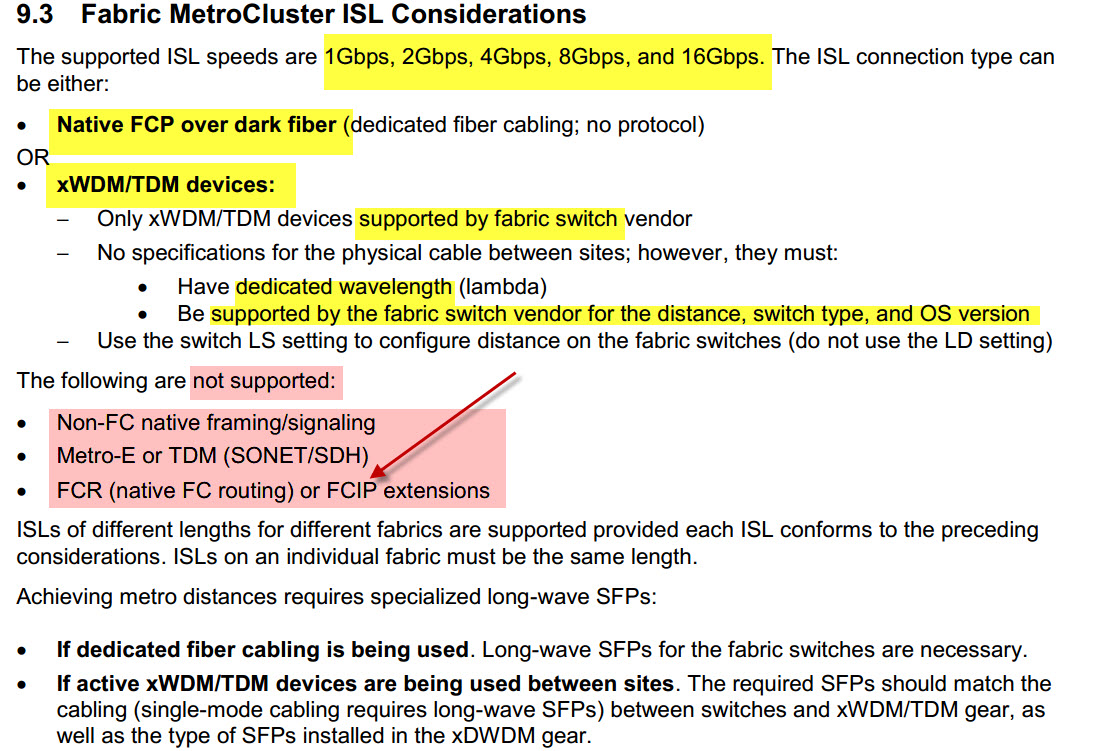 I've just discover that there are some news on 8.3.2 RC2 Release Notes. This has been extracted from that.

Support for Cisco 9250i switches

Starting with Data ONTAP 8.3.2, Cisco 9250i switches are supported in MetroCluster configurations.

Cisco 9250i switches include FCIP 1/10-Gbps Ethernet ports that can be used for a single ISL. To configure these ports, see NetApp KB Article 1015624: How to configure the Cisco 9250i FC storage backend switch in MetroCluster for clustered Data ONTAP.

Aside from the two FCIP 1/10-Gbps Ethernet ports for FCIP ISLs, the Cisco 9250i switch cabling for MetroCluster configurations is the same as the Cisco 9148 or 9148S switches.

There are some limitations (see kb) and the latency requirement can be difficult to reach but this is a starting point to use of FCIP wan links.