Upgrading simulator from 9.7 to 9.8 fail

Has anyone been able to upgrade the simulator from 9.7 to 9.8? Any tips or tricks to try?  When I try to upgrade, my system hangs after reboot at... 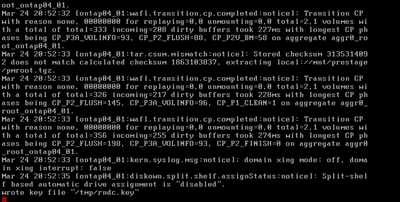 I tried using the 9.8 simulator install but it is very unstable and crashes randomly.  I also cannot get it to reboot reliably.   And yes, I have plenty of space in vol0.

Expand the RAM of the SIM to 8GB and than try it again..

Expand the RAM of the SIM to 8GB and than try it again..

Matt_Elvers_ProLion
In response to Fabian1993

what is the proper number for that?  The current 5GB doesn't work out multiplying by 1024.

So changing the memory to 8gb has fixed this issue.  Because it wasn't done before the first power on, I needed to change it in VMware and set the variable for the memory at the LOADER prompt.

Side note, what caused the SIM to become unstable and crash was having the firewall turned on at the domain controller.  Found this little nugget in this blog... NetApp simulator 9.6 - Installation and Configuration (nazaudy.com)

Do you remember how did you change the memory in VLOADER after increasing in VMware?

I set the memory to 8192 in VMware, what would be the env value?

The command I am planning on using in VLOADER is:

The only environment variable that makes sense is "smbios.memory.enabled".
Prior to changing the vmware guest memory size I noticed that "smbios.memory.enabled" was the same as the guest vm memory.
The process I used to increase the memory on my 9.8 sim - note: this must be done while the simulator is shutdown - you won't be able to set the memory size of the vmware guest os while it is in a running state (whether it is hung/non-responsive or not)

2) Start the vmware guest (simulate onta 9.8) - when prompted to do so interrupt the simulator from booting - watch the screen closely as there will be a message which states "Hit any key to abort"

3) When the simulator is at the "VLOADER>" prompt use the following command to match the simulate ontap memory size to the vmware guest os memory size:
setenv smbios.memory.enabled 8192000

4) Next confirm that the change was committed using this command:

If they match then continue

5) Check the value of "bootarg.rdb_corrupt" - if this environment variable does not exist the type "boot"

At this point the simulator should boot and should become stable (not sporadic hangs).