The remaining 30 disk are type SPARE, and no partitioned.

I want the aggr0 of both controllers to use fewer disks, instead of 6 disks, only 4 disks in RAID DP each controller, and the 4 disks that I recover, I want to use them for the other 30 type spare disks, so I will have 34 disks for make 2 aggr of 16 disk

I have migrated the root volumes of aggr0, being as follows:

but now disks 8,9,10 and 11, are still SHARED type and have root and data partitions, and when I want to create 2 aggregates for data with the other 30 disks it doesn't let me select them. I have tried to change the type from SHARED to SPARED of those 4 discs, but have not succeeded.

What I have highlighted is the following, I have restarted the controller 2, and I have entered the Control C menu, I have selected the ADP 9 option.
I have used option 9a to delete owner and partitions, then I have selected option 9b, since I want the aggr0 root volume to be a partitioned disk, but not the rest of the disks, since I want them without partitions to add different data .
Once this is done, I have restarted the controller, I have executed boot_ontap, but it no longer starts, it always restarts and automatically enters the Control C menu and does not exit from there.
It does not automatically install the ontap on those 4 disks that I want.

Then I have entered Control C in option 5 Maintenance, and I have put the owner the controller 2 of those 4 disks (0,2,4,6) I have rebooted, but it does not install.
And finally, I have returned to option 5 maintenance, and then to LOADER, and there I have executed boot_recovery, it seems that it wants to start the Ontap installation, but it reselects the disks that it wants (0,2,4 , 6,8, + 10 HS) and not the ones I want, but at the end it shows me an error: it tells me that it has not managed to create the root volume.

Currently I have controller 2 that if I restart it, it does not have an aggr root volume and it does not start, it stops in the Controller C menu.

What would be the procedure to install the ontap on controller 1 with the ADP disks (disk 1,3,5,7 RAID DP) controller2 disks ADP (disk 0,2,4,6 RAID DP) and then the rest of the disks from 8 to 42 are of type SPARE without having partitions to create 2 aggregates one for each controller and store the data?

In response to JuanCarlosrl
3,447 Views

This is 100% destructive: it will remove all data and configuration information!!!)

Best way to fix this back

Can you specify type of disk (SATA / SAS) and controller model?

But note that DP requires a min of 5 disks.

In the other  storage fas 2720, but 4 disk SSD for storage pool, and other disk SATA 8TB,
I think we have the 4 disk RAID DP type aggr0 for each controller, am I right? 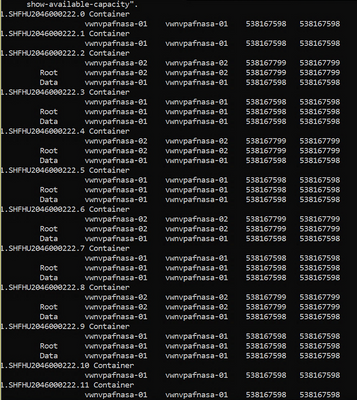 In response to JuanCarlosrl
3,464 Views

Realize that with ADP you are minimizing the amount of space the ROOT aggr uses. If you were to use 4 disks instead of 6 (which you cant) the root partition would just get bigger.

On the FAS2720 using the 10TB drives, you are in a special case. Normally for >6TB drives, you need 4+3 (7 drives) as a minimum. ONTAP will let the ROOT aggr build with 3D+2P+1S (as long as there are no external drives attached!). This is what you have. This will allow best capacity using 10TB drives. ADP on the FAS2720 with LARGE (>6TB) drives will NOT properly use ADP with *any* external attached drives! You must detach if you wish to use option 9a/9b again, but realize it will *STILL* end up with 3D+2D+1S for the root partitions.

You can then assign all DATA partitions to one node and make a single large AGGR (which will use RAID-TEC). You would have:

It would be useful to better describe your disk. What I can gather is this:

If it is then I would expect another larger AGGR of 141.36TiB on the 8TB drives leaving the SSD for a Storage Pool (to be used as Flash Pool)

In my case with this disk configuration it is not possible to do a 4 disk dp raid for each controller?

If so, then the storage was well configured from the factory, I thought it could be done as with the fas2720 storage that I have with 8TB disks, it has 4 disks for a controller and another 4 disks for the controller 2 as I have attached the previous image .

If I can't do what I want, how can I now have controller 2 with the aggr0 root created?

I have launched option 9a and 9b in the Control C menu, and it has cleaned the disks, that its owner was controller 2, those of controller 1 are correct, and it still has its aggr0 volume.

After doing 9a and 9b, I have carried out a halt to restart the controller2 and I don't know how to proceed so that the software is automatically installed and the agg0 is created, it does nothing, when restarting it automatically enters Control C mode.
I have tried to enter option 5 maintenace mode, then enter LOADER and there launch the boot_recovery command, it seems that it tries to do the installation automatically on the disks that he wants (without me being able to choose which ones, or type) and then ends with a error, it says it failed to create the root volume.

Thanks for your help

In response to JuanCarlosrl
3,448 Views

This is 100% destructive: it will remove all data and configuration information!!!)

Best way to fix this back

I have to reinstall the ontap for controller 2 to work properly, is that correct?

The good thing about this cabin is that it is not in production.

In step 11 and 12, what do I have to do? When option 9b is done, how do I install the ontap image? I restart the 2 controllers after doing step b, and the ontap is already installed directly, without doing anything? Do I have to select an option to install or is it automatic?

Do I need to have an ontap image and install from a netapp option? I am lost at this point

If I want to install 5 disks in RAID DP, how do I make that configuration be like this? You indicated to me previously that it would remain (3D + 2P + 1S for each controller), is that automatic? Is there a possibility that they are 2D + 2P + 1S?

I see the document Netapp.

The minimum number of disks in a RAID-DP group is three: at least one data disk, one regular parity disk, and one double-parity (dParity) disk. However, for non-root aggregates with only one RAID group, you must have at least 5 disks (three data disks and two parity disks).

How would I go about selecting 3 disks for installation for each node?

Today I have tried the steps you have indicated, but I have only been able to do so in one way. Then I will do it as you indicate, first a controller 1 and then controller 2.

What I did was on controller 2, boot option 9, 9a, then 9b and it rebooted. When it restarts, I have been able to see that it automatically takes the disks 0,2,4,6,8,10 without me telling it anything, it sets them an assignment, it partitions them, but then it gives an error, the agg0 volume could not be created. Attached logs.

I need help, how can I continue?

The storage came from the factory with the 6 disks assigned to a controller and the other 6 to the controller 2, finally I want to leave it as initially.

In response to JuanCarlosrl
3,243 Views

Thank you very much, I have done what you tell me and have installed correctly on both controllers, and the disk configuration has been (3D + 2P + 1S) RAID DP.

My question is whether it is possible to perform a RAID DP (1D + 2P) on each controller because I have not seen the possibility of choosing the disks, since the installation does it automatically and it does not give me a choice.

In other storage, I have seen that the factory is configured in such a way.

In response to JuanCarlosrl
3,149 Views

You are lacking in your detail. For any help to be produced, you need to supply more details about your config.

Do you have a local NetApp Partner or NetApp SE to work with?

You probably need to end up removing ownership of all the "data" partitions and assigning them to one node. Then decide if you want to split the remaining drives between nodes.

For example, from the cli:

(for each drive listed for node-02)

Then decide if you want to split the remaining 30 drives:

Then create your aggregates

MAC CTG Thank you for your help and for the dedication of your time, your answers have been of great help to me and I have been able to initialize the sorage again.

The storage is now up and working.

My question is how the factory configured storage has come,

It was to know if that, it could be undone, and make a new installation, but that only dedicates to controller 1 an aggregate of 3 disks for agg0 and another aggregate for controller 2 with agg0, all of type RAID DP.

It is knowledge for future installations