I have two nodes of OnTap 8.3 running on VMware 6.

I also have a Win 2012 server running

My machine only has 8GB of RAM.

All three run, they can be slow from time to time,

but they do run.

I did not make any changes to the settings.

VMware is pretty good at memory overcommittment.  Hopefully you are getting most of that from transparent page sharing, or you've put VM swap on SSD.

If this post resolved your issue, help others by selecting ACCEPT AS SOLUTION or adding a KUDO.
0 Kudos
22 Replies
Reply

I've been following this thread for awhile now as I'm constant user of multiple vsims for lab work. Most recently I've been using the "low_mem 512 / vnvram.size 64 / nvram_discard true" note from above to drop my 8.3.1, and more recently 8.3.2, vsims down to 3Gb. (note: I always do 1-node clusters cuz multi-node doesn't but me much for what I do). I run these this under both Fusion8 and an ESX6 server.

I do alot of provisioning automation testing (create SVMs, volumes, policies) but usually never more than 6-8 SVMs, a dozen volumes, plicies, etc before I tear down the SVMs/volumes and start over again. About my only problems seem to be occasional root vol currption (recent after ESXbox power failures) and sometimes the vsims get sluggish. I usually backoff and reboot and am fine.

Recently I felt my 'sluggishness' was coming too often so I decided to up by VMs from 3Gb to 4Gb on my main ESX6 server. I halted, used vSphere webclient to bumb from 3072 to 4096 MB and then powered on. I got the error, very similar to above, which eludes to memory issue. I didn't figure I needed to re-do the LOADER setenv's if I was increasing but I re-did those and get the same error. In reading this thread it sounds like 'setenv nvram_discard true' may be required whenever changing VM memory size up or down, so I was hoping that would fix it but it didn't.

Any ideas? I hate to rebuild these, but I guess it's good practice. 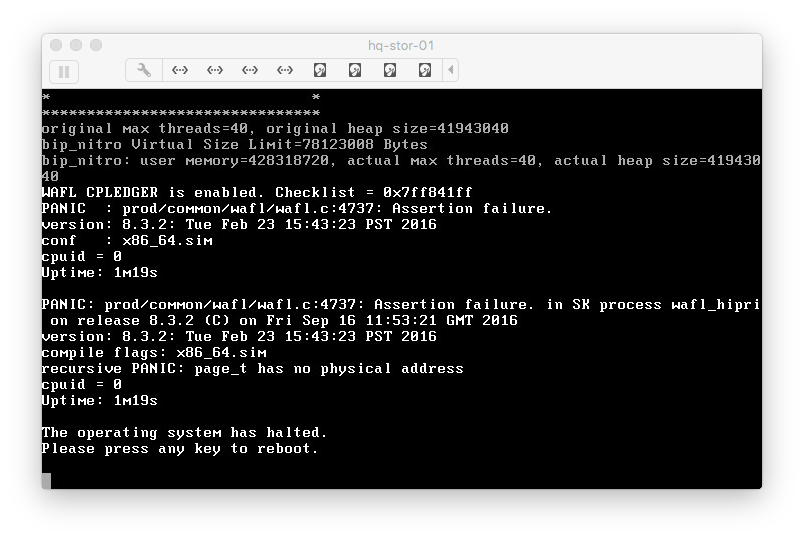 You're probably running into a situation where the PCIhole is landing in a bad spot.  Try manually placeing it at 1024 in your vmx file:

With 4gb of ram, and the pcihole at 1024, go with low_mem 760, vnvram.size 256.  The discard setting is needed whenever you resize the vnvram, so be sure to do a clean shutdown first.

If this post resolved your issue, help others by selecting ACCEPT AS SOLUTION or adding a KUDO.
0 Kudos
22 Replies
Reply

Well, here is a quick update. On a hunch I just upped the ESX6 VM memory settings from the 4GB I was attempting to 5GB. I powered on, VLOADER setenv the "low_mem 512 / vnvram 64 / nvram_discard true" and they seem to be booting up fine now. This raises some questions I'm now wondering about.

1) is there any difference in what happens between 'autoboot' and 'boot_ontap'? I think I've used both at different times and wondering

2) How persistent are each of these?

2a) setenv bootarg.init.low_mem 512 ? --- I read above that this tamps down BSD space ... is this just for "this bootup?" or persistent on subsequent boots?

2b) setenv bootarg.vnvram.size 64 ? --- just this boot or persistent on subsequent boots?

2c) setenv nvram_discard true ? --- this one sounds like it's 'just for this boot' whch makes sense

Thanks Sean. I think your reply and my followup Q's overlapped so you already answered most of those.

Here's my ESX ignorance question: How do I edit a vmx file on ESX?

I know where that file is found under Fusion but ESX6/Webclient is still new to me.

discard is this boot only, the rest are persistent.  Look on the next boot and you'll see its flipped back to false.  low_mem manually sets the BSD memory space.  Without it it tries to auto size which works fine with more ram.  The smallest controller that actually supports 8.3+ was the 2240 with 6gb, so 5gb is a good compromise without needing to tune it or deal with extraConfig parameters in the OVA.